Enjoy a pint of the finest Young's cask ale in the covered market, or choose from our extensive wine list whilst relishing the sights and sounds of a piece of English history. 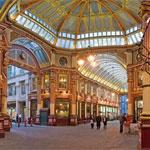 The Tavern takes great pride on great hospitality and offers a range of options for any celebration, drinks party or function.

Quiz nights, birthday, leaving drinks or retirement parties, business meetings or corporate functions, weddings and christenings, music, wine, cheese or beer tasting, you name it they do it.

The Lamb Tavern is situated at the heart of Leadenhall Market first built in 1309 by Sir Hugh Neville. The original building had a large roof of lead hence the name Leadenhall and although it is not certain it was built as a public place by the end of the 14 th century it was firmly established as a market and for many years was the site of the City granary.

Unfortunately the original Leadenhall was badly damaged in the Great fire of 1666 and was rebuilt in its present form by Sir Horace Jones. It continued to function as a market the majority of the traders being fishmongers and butchers and in fact today as well as many shops, bars and restaurants there remains a fishmonger in Central Avenue.

The Lamb Tavern site however has much grander origins than the 14th century market situated beneath it. It directly overlies the Roman Londinium basilica a large building used by the Romans for judicial and commercial purposes. Built in 50AD then rebuilt in 120AD the basilica was then the largest building in of its kind except for the Basilica Ulpia in Rome Itself. It was over 500ft in length (about the size of St Paul's) and to the south lay the forum filled with a whole host of stalls, shops and workshops selling goods and services to those who used the basilica. The Lamb Tavern as a place to take refreshment adjacent to a market can be viewed as carrying on a tradition first established in Roman Britain almost 2000 years ago!

Whether you want to book a room or find our best room prices at the Lamb Tavern drop us a quick message and we'll get back to you. Or call us for a faster response.

Some additional information about City from a field in the City table.