Passionate about the great British pub. 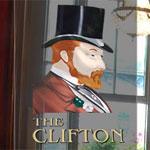 The Clifton Hotel is around 200 years old and was initially a hunting lodge until the merchant owner became fed up with giving all his booze away free to his friends! So, once he had obtained an ale licence, he started charging them and the Clifton became a pub, rather than a hunting lodge.

In those days royalty was not allowed to visit pubs, only hotels. When King Edward VII used to meet Lily Langtree at the pub he had its name changed to The Clifton Hotel and it has remained so ever since.

Ask The Clifton a question

Whether you want to book a room or find our best room prices at the The Clifton drop us a quick message and we'll get back to you. Or call us for a faster response.

Some additional information about St-Johns-Wood from a field in the City table.