The Hands of Flowers Marlow 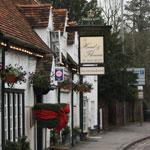 The Hand and Flowers was opened in March 2005 by Tom and Beth Kerridge.
In less than a year they gained themselves one Michelin Star, 6/10 and Buckinghamshire Newcomer of the Year in The Good Food Guide, 3 AA Rosettes and one Egon Ronay Star.

Tom was previously head chef at Adlards in Norwich (one Michelin star), and senior sous chef at Monsieur Max in Hampton (which also had one Michelin star). Before then, Tom cooked at London restaurants including Odettes, Rhodes in the Square, Stephen Bull and The Capital.

The entry in the 2007 AA Restaurant Guide reads: “This whitewashed pub on the outskirts of town may give a rather unassuming first impression, but the savvy know this place is a class act, and with chef-patron Tom Kerridge at the stove it has a fine pedigree. Tom’s cooking is intelligently simple and elegant, with flavour and high skill top of his agenda.”

The Hands of Flowers

Ask The Hands of Flowers a question

Whether you want to book a room or find our best room prices at the The Hands of Flowers drop us a quick message and we'll get back to you. Or call us for a faster response.

There are additional venues near Marlow with room hire, please see use the main search.